The Mothers’ Union was established in Ireland in 1888. Its purpose was to encourage parents in caring for their children, not just physically and mentally but also spiritually. From the outset it recognised that strong relationships and the role of family, however defined, are crucial in building healthy communities. See here to celebrate the work of Mothers' Union and our Irish Founder Annabella Hayes

There are more than four million members of Mothers’ Union today in 83 countries around the world. 450 of which live in Dublin & Glendalough. Each member subscribes to the same values; the moral and ethical codes that are central to the ways in which we operate.

Firstly, we are firmly rooted in a voluntary ethos centred on mutual respect and collaboration.

Secondly, our governance, leadership, and programmes are driven by and undertaken through members within their own communities worldwide.

Thirdly, we work with people of all faiths and none.

Whilst the ways in which we operate to fulfil that need may be different from that of the world of the 19th century, our vision today is still of a world where God’s love is shown through loving, respectful, and flourishing relationships. This is the essence of our work.

We aim to show our Christian faith by the transformation of communities worldwide. We can do this through the promotion of stable marriage, family life and the protection of children. This is our mission. It is what we aim to achieve.

Getting to know our Founder Annabella Hayes

As we celebrate Annabella Hayes’ legacy 100 years since her death we take the time to reflect on her life. Mothers’ Union was founded in Raheny, Dublin in 1887 by Mrs Annabella Hayes. Annabella was born in Dublin in 1847. In December 1866 she married the Reverend Francis Carlisle Hayes who was then curate in Sandford Parish Church, Dublin.

In 1867 he was appointed curate of St. Andrew's Church, Suffolk Street, and their first child, Ernest William Carlisle Hayes, was born in February 1868. In 1873, Sir Arthur Edward Guinness (later Lord Ardilaun) appointed him Rector of Raheny Parish and he and Annabella moved to the Glebe House where they were to remain for the next forty-five years.

Their second child, Marie Elizabeth (always known as May) was born in May 1874, and in April 1878 her sister Ethel Clara Ridley was born. A boy, Maurice, was born in 1886 but sadly died in infancy. Ernest went to school at St.Columba's and an English governess, Connie Gibbs of Willesden, was appointed to look after the education of the two girls.

In 1887 Annabella Hayes set up the first branch of the Mothers' Union in Raheny, inspired by what Mary Sumner had done in England eleven years before. Little did either of them know that in the twenty-first century world-wide membership of Mothers Union would have grown to over four million.

Canon and Mrs Hayes liked to travel and after Marie's untimely death in Delhi in 1908 aged 33, they travelled to Delhi to visit the hospital where Marie had worked for the previous three years and to meet people she had worked with. Later Annabella edited and published letters which Marie had written to home. Marie's final letter, sadly, arrived some weeks after the fateful telegram giving news of her death had been received in Raheny. The Hayes memorial cross in Raheny village was erected some years later.

Canon Hayes retired in 1918 and he and Annabella moved to 12 Northbrook Road which was apparently owned by Francis since his days at St. Andrew's. Annabella survived a bad bout of 'flu shortly after they moved, but was taken ill again about a year later. She was diagnosed with liver cancer and died at home on the 7th February 1921 age 74 and Francis was 94 when he died on 12th December 1931.

Annabella is buried in St. Fintan's Cemetery in Sutton and her headstone (and that of Francis) stands at the highest point of the Cemetery. It is, however, not made of stone but of wood - teak, and despite its having stood there for 100 years there is absolutely no sign of decay in the timber. The cross however has suffered some weathering, the plinth that supports it is cracked and the grave itself needs some repair. 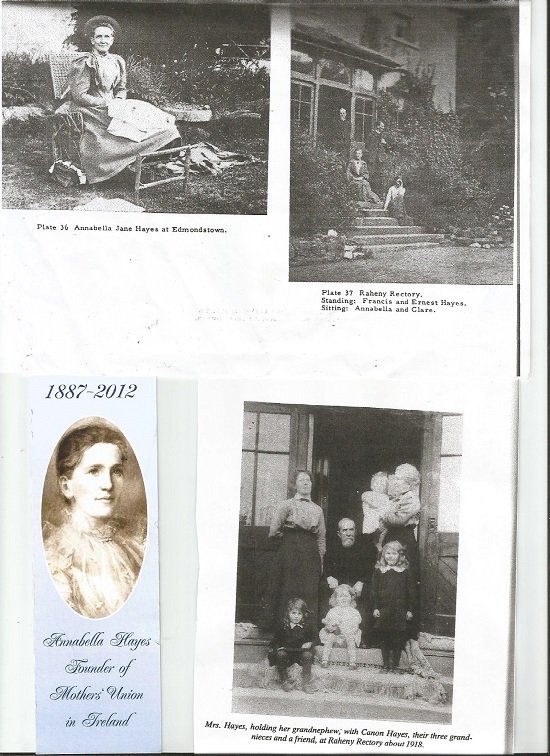